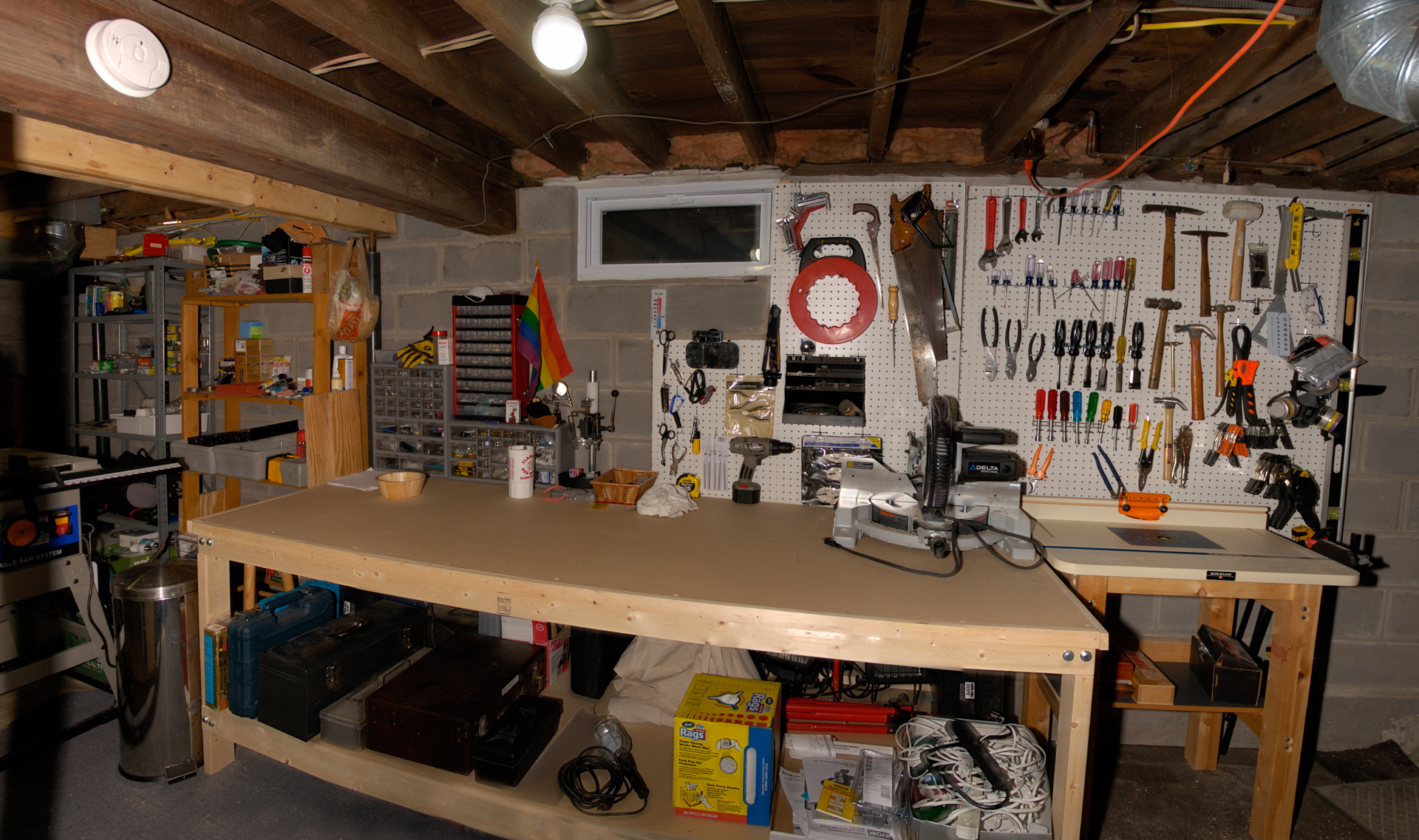 In Part I, I wrote about my experiences in the first three steps of the KonMari method, as I worked my way through clothing, books and paper, all of which went relatively smoothly for me. Which brought me to what Marie Kondo calls komono, or miscellaneous items.

Clearly, if the method only has five steps, and three of those steps are fairly limited in scope, that leaves a whole lot of clutter to be tackled in one fell swoop. (The fifth category, sentimental items, is left for last, but it is usually fairly limited in its scope as well.)

One need not be especially astute to notice that we are left with a hell of a lot of stuff, all lumped into the miscellaneous pile.

Even for someone decluttering for the first time, clothes, books and papers are fairly manageable, defined categories. So you’re moving along, feeling good about how much progress you’ve made, and then bam! You hit the wall. A wall of clutter, in the form of  “komono.”

In The Life Changing Magic of Tidying Up, Kondo does break up the komono category into sub-categories, as follows:

Unless you are a young Japanese woman whose personal space is limited to a single room, (which seems to have been Kondo’s original target audience,) you might find this list to be somewhat inadequate. She goes into great detail in some areas, differentiating skin care, makeup and other consumables into separate categories, but completely ignores a great many other items that contribute to the clutter in many a home.

Where are the tools? Linens? Home décor? Even food didn’t manage to make this list. While any of these items could be the tools of a particular hobby, they are generic enough that most people, even small apartment dwellers, will have at least a small collection of any of the above. For the average American homeowner, I’d wager each of those might deserve its own sub-category. I suppose they might be lumped under “household equipment”, but it’s hard to evauate a workshop full of tools along with “stationery and writing supplies.”

As you may have gathered, I crashed and burned pretty hard when I moved on to this step. I went from small, self-contained categories to, basically, the entire rest of the house. For the most part, Kondo’s subcategories were of little use to me. I don’t wear makeup, and my skin care regimen is mostly my plant-based diet. I had already sorted my ties, belts and a few old watches when I did my clothing. None of this was helping me address the clutter that inspired me to start this process in the first place.

Feeling adrift, I attempted to try other decluttering methods at this point. I tried using a space-based method. I emptied my nightstand, some of the contents of which clearly hadn’t been touched in years. A bag of Livestrong bracelets? A tiny mid-2000s cell phone with an Italian charger and SIM card? Those items immediately went, as did anything else that I obviously didn’t use. Halfway through, however, I again got stuck. There is sound logic in decluttering by category. My nightstand had become the proverbial junk drawer, and its contents had little relevance to each other. I ended up shoving half of it right back inside, to be dealt with another day.

The success I did have was actually specific to two categories of my own making. One was holiday decorations. I was decluttering in January, as many of us do, and it was time to take down the holiday decorations. I decided that I might as well organize and purge while I had everything out. Every December, I pull the garlands out of the tote in which I shoved them the previous winter and have to figure out which one fits which entryway. This year, I actually labeled them. I also went through all of the boxes and removed anything we no longer use, including the artificial tree I brought with me into my first apartment. Not only had we replaced that tree when it started to shed too much, but we’ve been getting fresh trees for several years now.

I also had several totes full of ribbons, bows and other wrapping paraphernalia. I’d stockedpiled these items during after-Christmas sales, but rarely used them. We do limited gift exchanges. We always travel to the holiday gift exchanges, and the frilly bits get mangled in transport. From an environmental standpoint, the wrapping paper alone seems like a terrible waste. I probably had more gift decorating supplies than I could have used in several decades, even if I used them on every single gift I wrapped. I decided to save only what I could reasonably use. As I tried to sort through it all and decided what to keep and what to donate, I realized that I didn’t actually want to use any of it. I put all of it into the donations box, and reclaimed the totes for the decorations we actually use and enjoy.

My other big success was actually more paper, in the form of boxes. From the time I started purchasing electronics and appliances, I saved the original boxes in which they came. (The lifetime warranty service that came with those original electronics required original boxes, which got me in the habit of saving them.) The boxes did prove helpful when it came time to move. When we moved into our current home, I put all of the boxes into an attic space in our bedroom, where they’ve remained and continued to accumulate.

We’ve been in our current house for twelve years now, and have no plans to move any time soon. Many of the boxes I had stored away were for items we no longer even own. I decided that it was time to clear out all of the boxes. It took many long hours to pull out the boxes, remove the packing materials, break them down and bring them downstairs. The end result was an entire empty storage space. (And probably one hell of a day for the waste management guys that week.)

I was able to use the empty storage space to set aside the boxes of books, clothing and a few miscellaneous items I’d decluttered to await the UU book and rummage sales later this year. (Most decluttering resources wisely suggest getting things out of the house immediately, and for the most part, I agree. However, we like have our donations go to support our church, and we make a point of actually making those annual drop-offs.)

Hitting the Wall (of Stuff)

I tried clearing the basement next. After a few boxes, I got overwhelmed and gave up for the time being. Having removed so many books and paper from the office, I thought that I might be able to do that space next. I was able to remove a lot of unused office supplies. But, I soon found that most of what remained was either sentimental items, or semi-sentimental, like my photography gear. (That all comes later in the process.)  At that point, my decluttering slowed dramatically. I occasionally pulled items we never used out of drawers and tossed them into donation boxes, but I lost my momentum. I was also obsessing about finances by that point, and no longer focused on decluttering.

So what have I learned from this process?

I really like the KonMari method. As written, however, it has serious limitations. Sorting by categories works very well for items that are both part of a well defined category, and are already mostly co-located. For everything else, it is critical to define one’s own categories. This is where I got stymied, because I’d been working off the lists in the book, and those lists stopped working for me. What I clearly need to do is to define my own categories for all of these miscellaneous items.

If a space is so cluttered that you can’t see what’s there, you may need to sort before you can evaluate. Basements, garages, sheds and other storage spaces are the most likely problem spots. There is no space in our house (probably including the yard) into which I could empty the entire contents of the basement, were it even possible to move all of that stuff. Instead, I’m trying to work through the obvious junk in order to make enough space to focus on what remains.