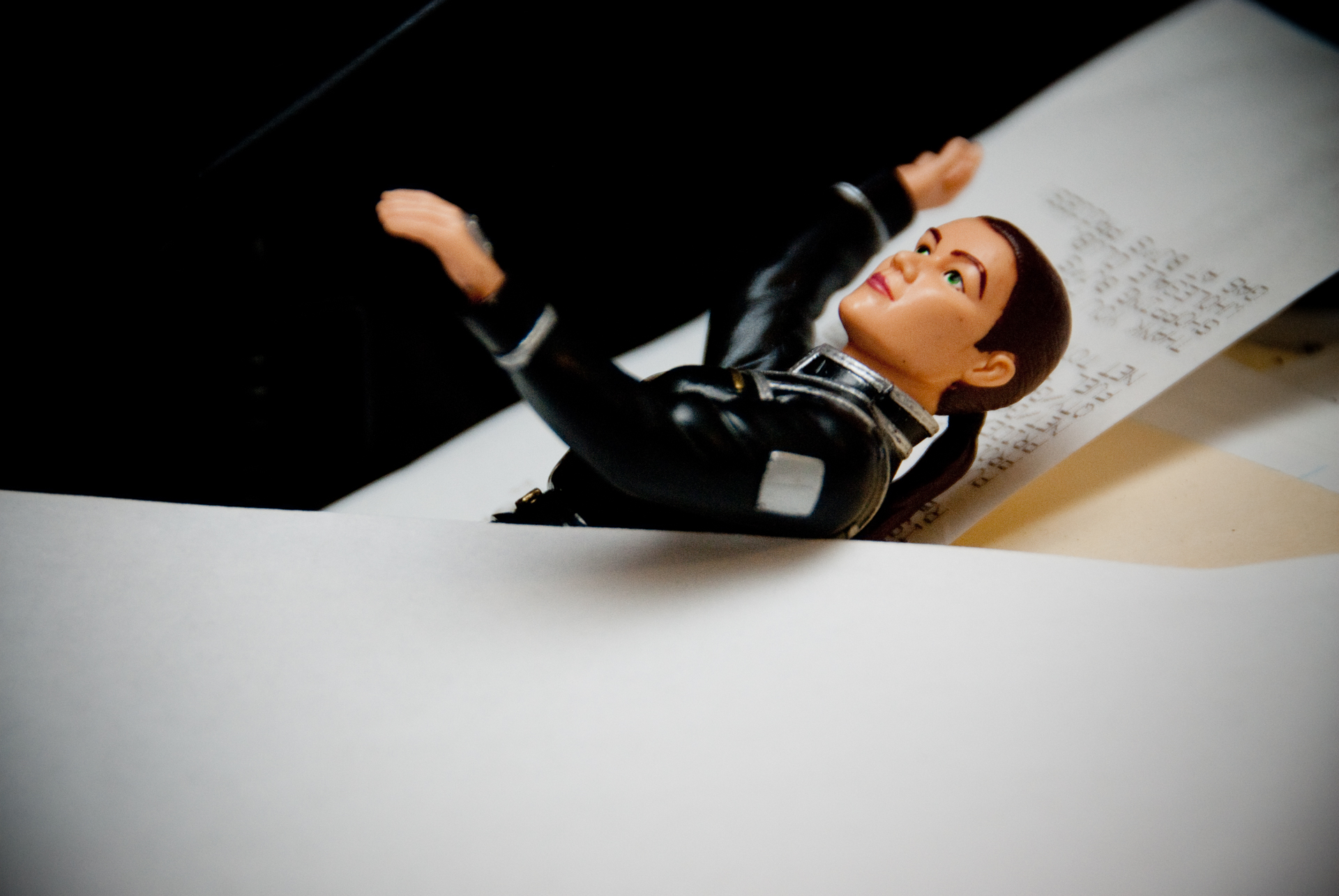 As I mentioned in my first post, I read Marie Kondo’s The Life Changing Magic of Tidying Up primarily because I already had it on my Kindle. Inspired, I started my 2017 decluttering using the KonMari method described therein. In the book, Kondo separates clutter into five categories: clothing, books, papers, komono (miscellaneous) and sentimental items. The idea is to address one category at a time, rather than working through one space at a time. Instead of decluttering the entire bedroom, one declutters their clothing, no matter where in the house it might be located.

The logic of this is sound. If you have things scattered all over the place and only work on one space at a time, you will keep encountering the same items over and over, even after having sorted through like items. You collect every item from that category in one place, and then begin the sorting process. So far, so good.

As directed, I started with my clothing. Due to lack of closet space in the bedroom, my closet is in the office. I collected everything from it and brought it into the bedroom. Next, I emptied all of my clothing from our dressers. I declutter my clothing almost every year, so I was surprised to see quite how much had accumulated. The bed was piled high with all manner of vestments.

Following Kondo’s instructions, I held each item, before deciding its fate. The item didn’t necessarily have to “spark joy” in me, but I did still ask myself if it brought me joy. I also checked if fit me, was in good shape, and went with the other clothing I was keeping. I got rid of a few pieces that I really liked wearing, but were just too worn out to keep. My focus was on building a basic wardrobe of fewer pieces that work interchangeably. By the time I was done, I’d filled three large boxes with clothes to donate. I filled another box with empty hangers.

With everything that remained, I decided to try the reverse hanger method of putting all of the hangers on the rod backward, and then turning them when I wore the item. Next year, I’ll donate anything I didn’t wear over the course of the year. (This obviously only works with the items hanging in the closet, but I’m thinking of trying a variation with the folded items in the dressers. Perhaps putting a safety pin on each item and removing it when I wear it?) Kondo is also very specific that clothing be folded in a particular way and placed vertically. I decided not to try that at this point in time.

Clothing done, I was very pleased with both the method and the results. I still kept more than I probably need, but I removed enough that I’ve considerable reduced my decision fatigue about what to wear. If I’d followed the method more strictly, I wouldn’t need to try the hanger test, but I’m definitely calling the clothing declutter a success.

Next on the list of categories is books. In the past few years, I realized that I no longer enjoy reading the same books over and over. Additionally, most of the titles on my bookshelves were available at the library. I’ve donated hundreds of books over the years, leaving only those that I was unlikely to be able to find at libraries (LGBT titles in particular) and that I thought I might read again. Each year, the number of paper books I kept grew fewer and fewer, especially when I started replacing some of my favorites with their digital versions. I didn’t actually have many books left at this point.

What had escaped the many years of purging, however, were the books in my office, which fell into one of two categories. The first was a variety of self-help books of one sort or another. I had books on perfectionism and procrastination, depression, simple living, speed cleaning, and more. Some of these books I’d read, others had sat on those shelves for years, untouched.

All of these books fell into what is often called “aspirational clutter.” These are the items we keep because they remind us of who we want to be, rather than who we actually are. I imagine that if I just read those books, I will be cured of perfectionism, procrastination, depression and anxiety. If I just follow the methods in that other book, I’ll have a spotless house that I easily maintain. This other book will help me to have a stress-free life. And all of those photography books mean that I can be a successful professional photographer.

Of course, having these books of my shelves did none of that. In fact, they had the opposite effect, creating expectations that I was never going to be able to fulfill. Most of those books were at least a decade old. Even if they weren’t out-of-date, I was clearly no longer getting any value from them. Rather than helping, they were actually holding me back. Instead of moving on to something new,  I expected myself to master whatever was in those dusty tomes on the bookshelf.

As Marie Kondo notes in The Life Changing Magic of Tidying Up, once you’ve read a book, you’ve absorbed its content and it has probably served its purpose.

You read books for the experience of reading. Books you have read have already been experienced and their content is inside you, even if you don’t remember. So when deciding which books to keep, forget about whether you think you’ll read it again or whether you’ve mastered what’s inside.

Thinking about all of the books I’ve read in the past few years, I was certain I would want to re-read, or at least reference, many of them. I’ve gone back to almost none of them after the first encounter. There’s always a new book with a different take or slightly updated information that I’d rather read instead. At one point in my life, I used to read the same books over, just as I would rewatch shows and movies. These days, I’d rather experience something new with my time.

Once again, the KonMari method worked well for me, and I found her insights on the usefulness of books after the first reading to be relevant for me.

Years ago, as digital statements and e-bills started to become commonplace, I switched over, shredding all of the old paper versions along the way. Before I tackled my clothes, I’d shredded a huge pile of Dr. Math’s old records that we unearthed last year. I actually thought that I had nothing much left in this category. I almost skipped it altogether, despite having two small filing cabinets full of papers. So back to the filing cabinets I went, removing and shredding statements from accounts I closed decades ago. Next, I checked every single document in my primary filing cabinet.

I discovered years worth of documents I no longer needed. As I purged, I filled the recycling bin several times over. I replaced user manuals with digital copies I found online or scanned. Many hours later, my files fit easily into one cabinet and the other cabinet joined the donate pile. Kondo advocates simply throwing out all users manuals. I actually refer to them semi-regularly, so having the digital copies is important to me.

I shredded a lot of documents over several days. The shredder overheated more than once, and jammed on several other occasions. I had to turn to YouTube to learn how to disassemble it to clear the worst of the jams. I didn’t even realize that I still possessed many of those documents. Others were decades old and I couldn’t foresee ever needing them again. Once again, I was not as aggressive in my purging as Kondo recommends. Since she basically says to throw out everything, I’m okay with that.

In this category, I experienced some of my first declutter remorse. A month after the big shredding extravaganza, I was trying to figure out the cost basis for a 1999 Roth IRA conversion. I realized that I no longer had the records and I couldn’t get them online. I think I eventually found the numbers I needed on Vanguard’s site, but it would have been easier to have some of the original forms.

Overall, I found the KonMari method valuable when dealing with my paper files, even if I am not willing to throw quite everything away. At least now, when I open the file drawer, I can easily access the folders and documents I need.

For her first three categories, clothes, books and paper, I found the KonMari method to work quite well for me. I didn’t follow it exactly as written, but tried to follow the guidelines. I made incredible progress in a short period of time doing so. My sock drawer closes easily. My clothes now hang freely, no longer wedged in the closet. So do the remaining files in the filing cabinet. My bookshelves no longer sag from the weight of their contents. More importantly, I feel a great sense of relief at having released some of the expectations tied up in those books.